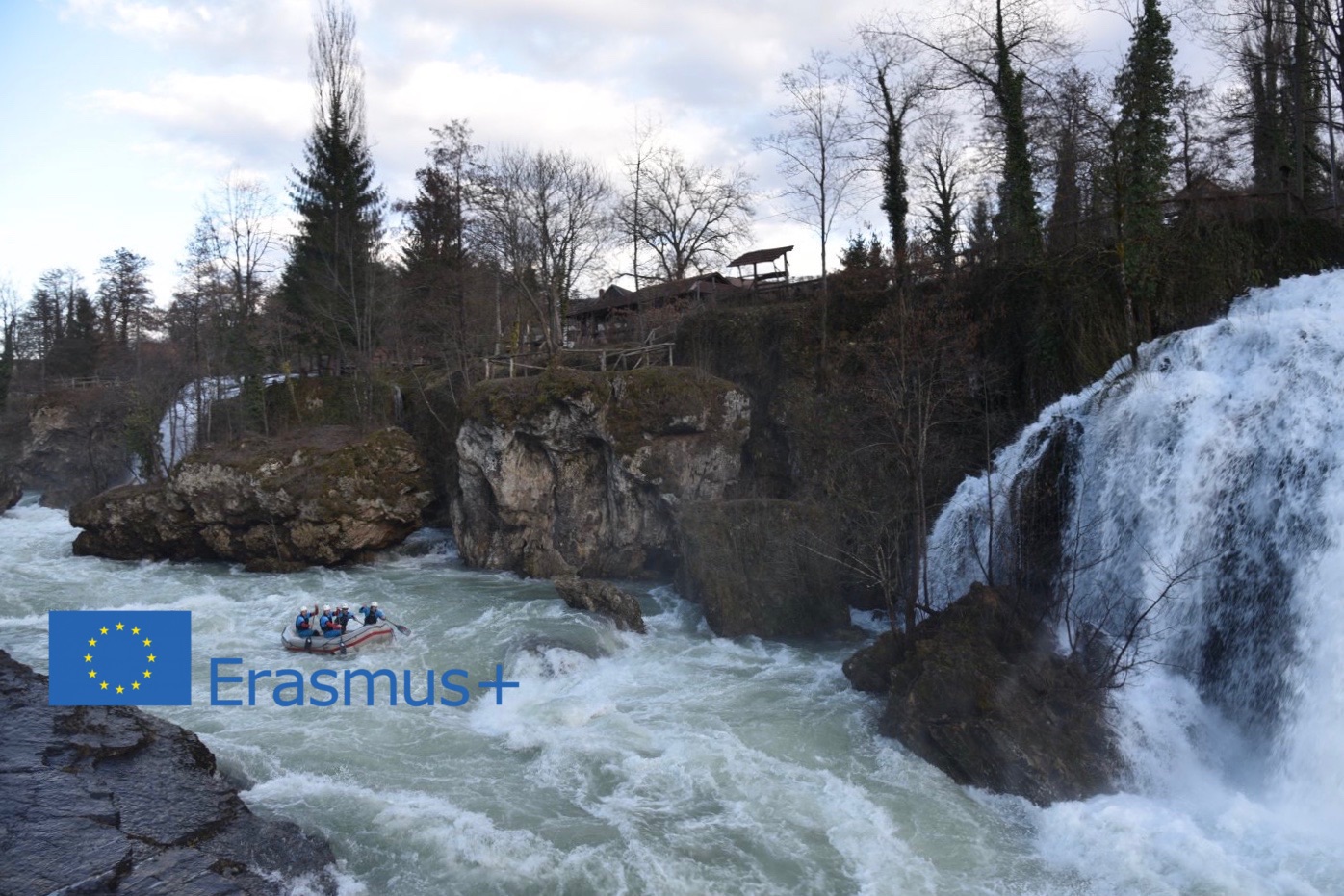 Launched "BE WATER", the European project on environmental education through water sports

The "BE WATER" project, co-financed by the European Union, has officially started in Slunj: it aims to enhance and “use” aquatic outdoor sports as a means of environmental education and awareness.

The kickoff of the project co-financed by the Erasmus + program has just been held in Slunj, Croatia, along the Korana River. The meeting was attended by representatives of the four project partners from Comunità della Val di Sole (Italy), the Kajak Kanu klub ’’Rastocki mlinari’’ (Croatia), the Rafting Club “Gimpex Straza” (Slovenia) and F.I.Raft (Italian Rafting Federation).

The activities carried out through the project will allow the creation of innovative and European environmental education tools based on outdoor aquatic practices (such as rafting and kayaking) and to start a transnational communication and awareness path on the importance of the water resource.

Project idea is born by the match of two transnational and common trends that need a common and innovative answer: on one side there is the outdoor sports practices in constant growth. With the increasing of outdoor sport practice popularity, mountains, rivers and other natural areas are under growing stress: according to the partners of the project, it’s is important to support this trend and bring citizen to practice open-air activities but at the same time it is essential to minimize the impact of outdoor sport activities on the wilderness, protected areas, rivers and to develop outdoor sport activities that include awareness on environmental protection. On the other side there is the specific water issue: waters sports and theirs industries need to be aware of -  and develop more resilient offer to - the water crisis at local and international level (lost of glaciers, pollution, …) not only for environmental sustainability but also for economical and social issues.

Indeed, in order to guarantee environmental sustainability and open-air sport growth there is a need to develop alternative educational and sensibilisation processes and tools able to involve and sensitize citizens.

The first action that will be developed by the partnership will be the training of some "ambassadors" of the rivers. Through training courses dedicated to rafting, canoeing and kayaking guides, the project will contribute to improving the knowledge of the peculiarities and problems related to water at local and global level.

Welcome to the WRF Portugal!

Welcome on board! The Federação Portuguesa de Canoagem's membership application has been approved by the Executive Board: Portugal becomes an official member of World Rafting Federation. Athletes are training and looking forward to their first international experience and the WRF President, Mr Danilo Barmaz, declares "We are glad to cooperate and develop rafting and paddle sport together!"

After successfully hosting the last Olympic Games in 2016, Rio de Janeiro will host Pan-American Master Games in September 2020 and rafting (R4) has been included in the programme thanks to the collaboration between Brazilian Rafting Association, Brazilian Canoe Federation, ICF, WRF and IMGA.

United under the spirit of sport for all and promoting an active society, the IOC and IMGA signed an agreement in November 2016 (https://www.olympic.org/news/ioc-steps-up-its-support-for-mature-athletes- and-signs-mou-with-imga) to strengthen their cooperation in the field of masters sports and continue to explore means to promote and encourage mature athletes from all over the world to practise sport regularly.

2019 Senior Worlds is set to be another amazing event.

Please be aware the schedule may still change slightly, depending on TV requirements, and also the number of entries received for the event.

Mr. Patrick Vajda, the IFSO newly-elected President, declared: "It may seem surprising to mix so many different sports activities, but on reflection, one quickly understands that the problems arising in refereeing are the same regardless of the sport practiced!

- The notion of respect is a fundamental element often forgotten.
- The referee and the judge are “actors” in the sporting competition, whatever the sport. This word actor is crucial, since we are the only ones together with the athletes to have a direct impact on the result of the competition, not only through our presence on the ground but also through the result obtained by applying the basic respect for ethics.
- Protection of the referee and the judge by means of a recognized status is also a crucial question, since if we are not athletes; neither are we managers or elected people. Consequently a special status is required.
- Availability is a difficult subject for non-professional referees and judges (more than 97% of the referee population)
- Training, beyond the sport practiced, has an essential common core on

subjects as distinct as communication, poise, general behavior, stress etc. Though there are sports that are more or less complicated or more or less athletic for the referee, the role is always a major one. This is why it is essential to respect and to protect the person taking this role!"

The event is a great opportunity to show the results of the first year of WRF: an

important meeting for the Federations Board, the first international experience for new members and a big race that will see estabilished teams from all over

the world compete to conquer the title of World Champs in this historical period for Rafting.
The accomodation is free: room and board will be offered by Turkish Federation and discounts on Turkish Airlines flights for National Teams are now available.

AWARDED THE 2021 SENIOR WORLDS - SEE YOU IN FRANCE

During the closing ceremony on 13th June in Tunceli, Turkey, the French Rafting will be present not only with teams, but also with the FFCK delegation, to receive the WRF flag: indeed, the Executive Board of the World Rafting agreed that France will host the 2021 Senior World Championships in June in L'Argentière-la-Bessée, where the WRF Centre of Excellence (https://www.worldraftingfederation.com/news-wrf/145-ffck-and-wrf-open-the- new-centre-of-excellence-in-l-argentiere-la-bessee) has been inaugurated 2 weeks ago.

In the middle of the Alps, athletes from all over the world will paddle in Durance river where the agonistic field of rafting is borning in these days promising something big that, bearing in mind the whitewater French results in the Canoe

"I have good news" says Benedetto Del Zoppo, Sport Department Responsible of the Italian Rafting Federation (FIRAFT): the Italian Paralympic Committee (C.I.P.) recognized Rafting as an official sport by means of a Memorandum of Understanding and the next months the ParaRafting datas will be straight observed and analized by CIP. It is a historical moment, an event that will benefit the entire Italian Federation and represents an example for the other countries. Indeed the Paralympic field is a driving force for Sport in general, from the commercial team building to a new opportunity for other Para-athletes who are looking for adrenaline, fun and healty competition.

"Italy is selecting national teams through regular meetings for the the First World ParaRafting Championships ever, that will be organized in Kiev from 4th to 7th October 2019 by the Ukranian Rafting Federation and WRF" said Max Manfredi, Italian Member of the WRF Para-Rafting Commission.

A SUCCESSFUL NATIONAL CHAMPIONSHIP FOR NEPAL

National Rafting Championship of Nepal is over: on 19th, 20th and 21st

"We had circulated the message to all over Nepal and altogether 11 Teams (66 rafters) took part in the championship from different states of the nation: Nepal army, different clubs and river operator company participated and paddled together. We are very proud of this result and we're looking forward to the World Championship in June" said Mr Sudip Gautam, NRCA Secretary General.

Nepal Raft and Kayak Club Fishlin A won the National Title (results below).

from just 11 entries in their national slalom championships last year, to 27 this year! Fantastic to see our sport growing all over the world" (Planet Canoe (https://www.facebook.com/planetcanoe/videos/624641231294671/))

The results of the 7th National Kayak Slalom Championships are available on Planet Canoe (https://www.facebook.com/planetcanoe/photos/pcb.101561272032538 type=3&theater).